Keycolour Tracing dyes provide a simple and accurate method for monitoring the flow, velocity characteristics, mixing, and dispersion in large and small volumes of water. They are simple to use, reliable, and are vivid in clear or murky water and sewage.

They disperse rapidly in the water and travel with current flow. Keycolour tracing dyes can be visually identified with the eye in as little as one part per million of water, or by using a fluoremeter. These dyes are also great for tracing spray patterns of agrichemicals. Biodegradable and relatively non-reactive, Keycolour Tracing dyes generally do not interact with the system in which they are used.

Utilized in fields such as chemical engineering, sanitary engineering, hydraulic engineering, geology, and industrial pollution control, golf course maintenance and agriculture these dyes are highly efficient, and economical to use. Some of these dyes are great for use in coloring lakes, in ponds or fountains. These dyes are also used in the fishing industry as buoy markers. 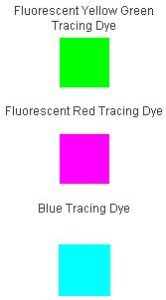